Got GEOINT? Attendees to the annual GEOINT Symposium will recognize this slogan that appears on the tee-shirts distributed each year at the preeminent geospatial intelligence conference. Produced and presented by the United States Geospatial Intelligence Foundation (USGIF), a non-profit, non-lobbying educational organization, the GEOINT Symposium is the nation’s largest gathering of industry, academia, and government to include defense, intelligence and homeland security communities as well as commercial, federal/civil, state and local geospatial intelligence stakeholders.

At the 2018 GEOINT Symposium in the Tampa Convention Center in Tampa, Florida from April 22 -25, not only did the representatives of the USC Spatial Sciences Institute “get GEOINT,” but GEOINTers got a lot USC Spatial, as well.

Kicking off the symposium at the GEOINT Foreword was COL [R] Steven D. Fleming, Ph.D., professor of the practice of spatial sciences with USC Spatial. Speaking on a panel about professional development for geospatial data analytics, Professor Fleming said GEOINT needs individuals who are nimble and adaptable: “They need to be curious and have that twinkle in their eye,” he said. “They need to feel free to question and raise an eyebrow at you.” 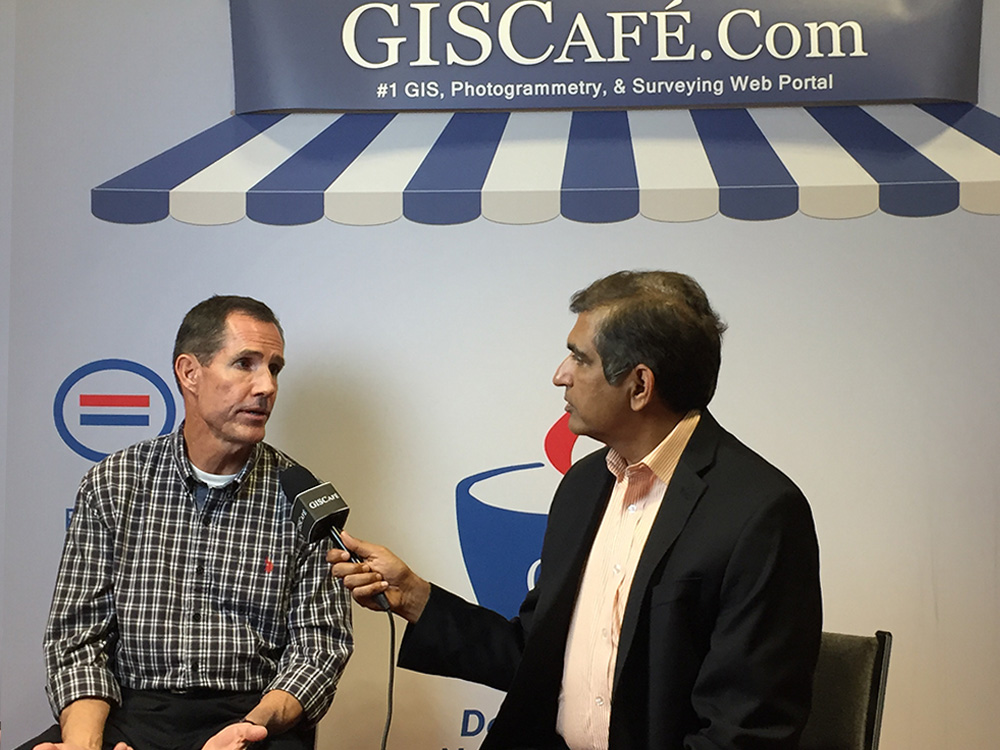 Fleming described the curricular philosophy of USC Spatial in offering three types of courses: essential, which cover fundamentals; advanced, which leverage what a student has already learned; and capstone, which build confidence. He also endorses more partnerships between academia and both industry and government. “Work with industry and government for real-world problems,” he said. “Put it in place to allow discussion, for students to learn, and for industry and government to get assistance. And when it’s over, maybe the students go to work for the organization.” 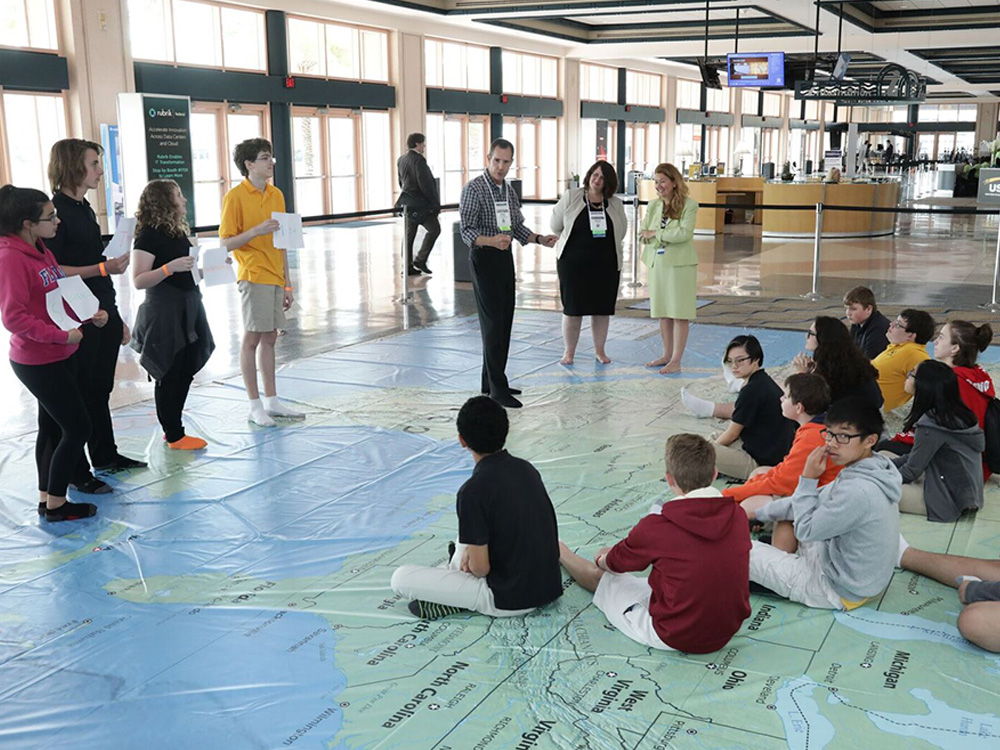 To help build the future professional pipeline, Fleming also talked with Tampa area eighth-graders on the importance of STEM in their education as part of the USGIF commitment to k-12 education. “Just by being here today, you are developing the capacity for curiosity about our physical world,” observed Fleming, as he stood on an interactive floor map of North America. “You’ll find math and the sciences, including the spatial sciences, will be important building blocks for your education ahead,” he advised.

The more than 3,500 symposium attendees from around the world also had the opportunity to review and vote on their favorite college poster presented by current and recent undergraduate students and selected Tampa area high school students on their geospatial intelligence research. USC Spatial’s Kevin Mercy won third place in the poster competition for his presentation on how LiDAR helped him uncover Mayan ruins. Mercy, an archeology major with a minor in human security and geospatial intelligence, explained, “In archeology this is huge, especially in Guatemala because we have this really thick jungle cover, so investigation there has been very limited. But now we see everything that’s underneath the jungle to very high precision—up to one meter—so we know nearly every physical structure that exists on the ground.” 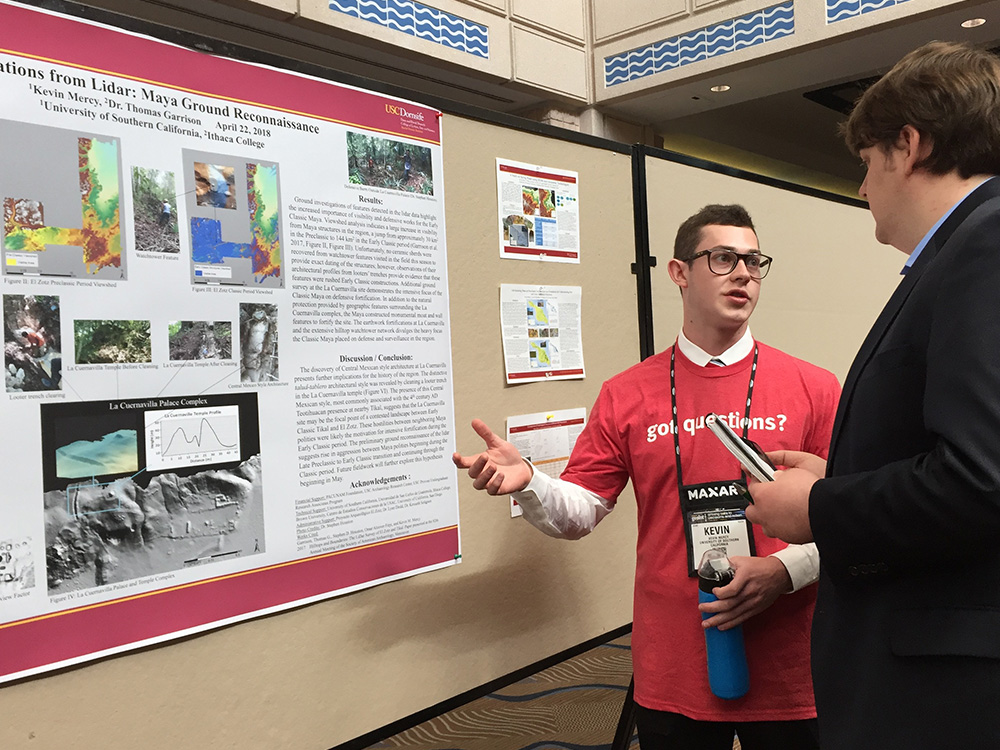 Using geospatial imaging and data analysis, a widespread team of which Mercy was a part identified more than 60,000 new sites that were previously undocumented (read the National Geographic article on this project). Archeologists using remote sensing and GIS technologies can develop “an overview of what is actually worthy of visiting and having attention in the field,” explained Mercy. Continuing his USC education in USC Spatial’s M.S. in Geographic Information Science and Technology Program, Mercy received a one-year USGIF individual membership as his prize.

In addition to participating in the symposium poster competition, Mercy served as a GEOINT Symposium student assistant. In exchange for working with the Symposium event staff, student assistants receive complimentary symposium registration and the chance to engage with GEOINT professionals in a number of contexts.

This year, the student assistants and other college students also learned how to use Hexagon’s Smart M.App platform to create an Incident Analyzer View—an interactive map displaying specific incident data. Students will display data using charts, graphs, gauges, and other tools while applying critical thinking and analysis skills. Mercy received the prize as the best mapmaker and will be featured in podcast following Hexagon’s 2018 HxGN LIVE event in Las Vegas this June. 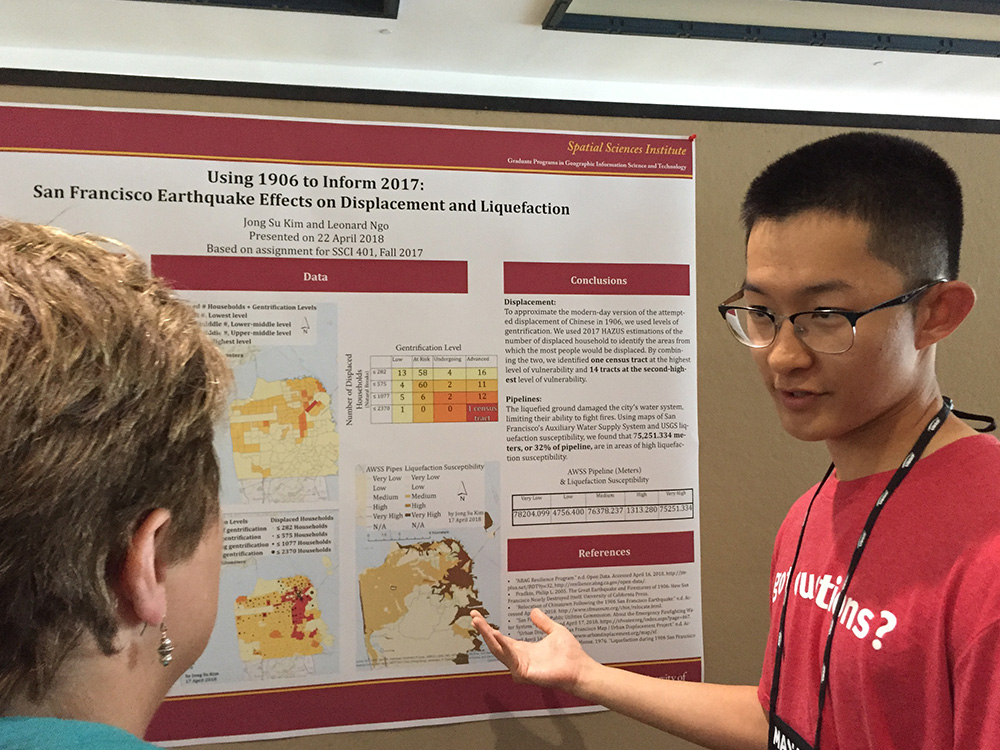 Joining Mercy as a student assistant and poster presenter from USC Spatial was Jong Su Kim, an international relations major with a human security and geospatial intelligence minor. A cadet in the USC Air Force ROTC, Kim said, “Attending the GEOINT Symposium is a fantastic opportunity to network with GEOINT professionals and hear from leaders in the field. Working the conference as a student assistant was a little tough (especially with projects due that same week), but so very worth it. I highly recommend the experience!”

Kim is enrolled in the USC Spatial M.S. in GIST Program as a progressive degree student, which allows a USC undergraduate to start master’s-level studies while completing undergraduate degree requirements. Kim said, “I just began my M.S. in GIST this semester, so as a relative newcomer to the discipline, this experience was so worthwhile. It’s not every day that you get to present your research to GEOINT professionals, let alone meet with so many of them.”

Participating in USGIF’s Young Professional “Golden Ticket” program was Richard Windisch. In reflecting upon his 2018 GEOINT Symposium experience, Windisch said, “I was honored to be selected as a USGIF Golden Ticket Winner. Each year, USGIF offers the Golden Ticket program as an opportunity for young professionals to win an exclusive opportunity to meet and hear from seniors and innovators in the GEOINT world in a personal setting. Only a handful of candidates who apply are selected, but the program includes private networking events, luncheons with government seniors, and admission to the chairman’s reception among other opportunities.” 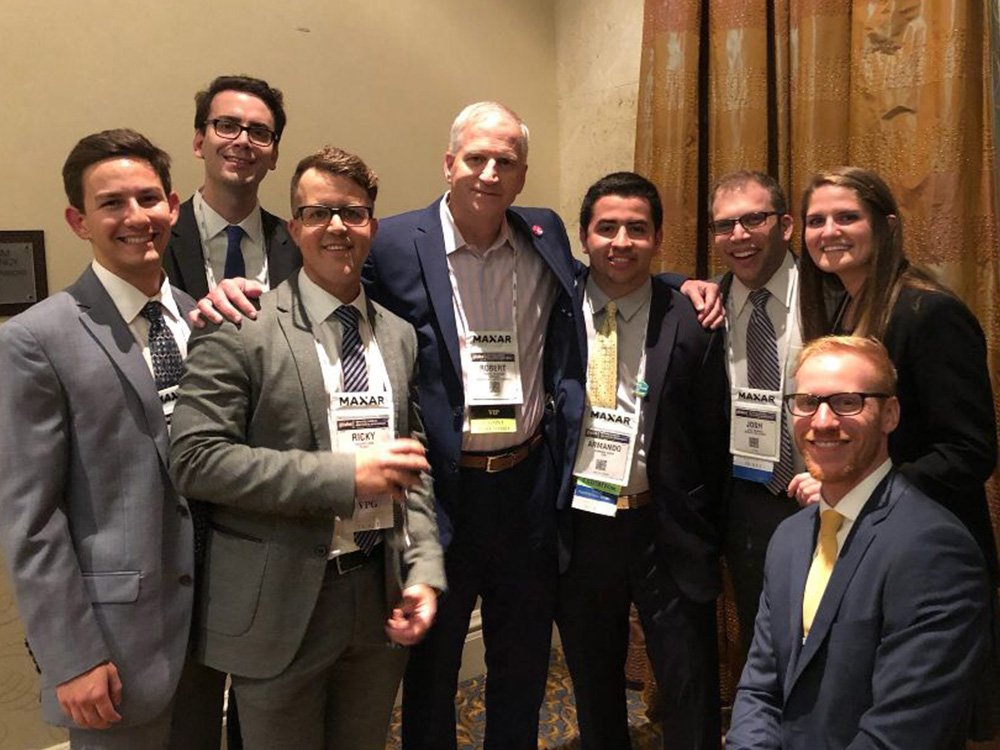 “I consider myself relatively new to the field of Geoint, having been introduced in Fall 2017 through SSCI 401 GeoSpatial Intelligence with Colonel Fleming. I enjoyed his course so much that I applied for the Golden Ticket program, eager to learn more about the field of Geoint and also sought out taking SSCI 579, Geospatial Tradecraft in order to learn more material at a higher level.”

“I was the youngest professional in the group; most other winners were in their late 20s, early 30s, and already professionally established. The experience was so beneficial because I was included in the same cohort as them, and they took me under their wings to form a natural mentor relationship. The conference was a great opportunity to speak with leaders of the industry and some of the most brilliant minds. Highlights for me include meeting Steve Shea, who worked on the scaling algorithm for Google Maps and Mina Chang, CEO of Linking The World. Mina gave a keynote on using data for humanitarian relief, something I truly believe in doing given my research with Dr. Andrew Marx on the Myanmar Rohingya Genocide.”

“A theme of the conference was how we cannot just have hard science, but need a combination of liberal arts and science to arrive at the best possible solution. All Golden Ticket winners were given a copy of Scott Hartley’s book, The Fuzzy and the Techie. Hartley’s goal in this interesting and generally well-researched book is not to show that being educated a fuzzy (majoring in the humanities or social sciences) is better than being educated a techie (the STEM disciplines of science, technology, engineering and math). Rather, for technology to work optimally, the two approaches, techie and fuzzy, need to be blended.”

“The interdisciplinary component being stressed reminded me of the value of my own interdisciplinary undergraduate education through the GeoDesign major, as I believe it has given me a framework and multiple perspectives with which I can approach problems.” 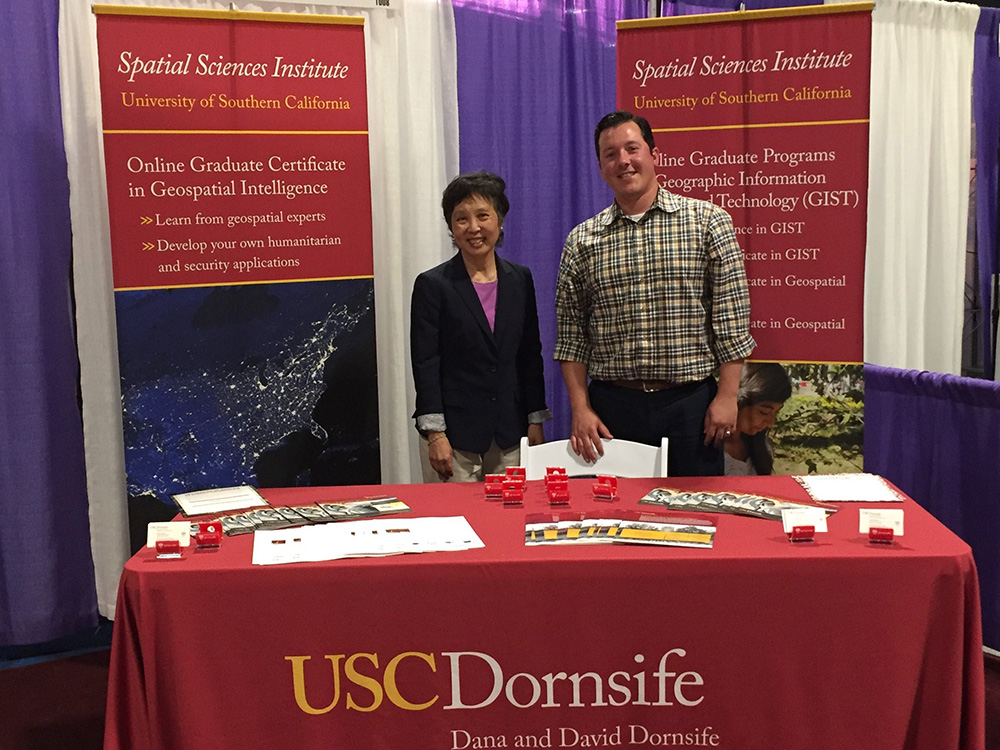 Helping USC Spatial connect with industry leaders for student internship and post-graduation job opportunities in the Exhibit Hall and throughout the symposium were USC Spatial Managing Director Susan Kamei and Academic Programs Director Ken Watson. “An important part of what we do each year at the GEOINT Symposium is to meet with leaders from industry and the various IC agencies to learn what kind of geospatial professionals they are seeking to hire,” said Kamei. “We also have a great opportunity to share with the GEOINT community leaders the breadth and depth of our human security and geospatial intelligence academic programs and initiatives,” added Watson. With Fleming, Kamei and Watson foster research collaborations for USC Spatial faculty with the organizations represented at the symposium. And as USC Spatial’s alumni ranks in the GEOINT world grows, symposium attendees can look for Fleming, Kamei, and Watson at the USC Spatial booth in the Academic Pavilion each year.

Fleming and the USC Spatial team already are looking ahead to the 2019 GEOINT Symposium, which will be held on June 2 – 5, 2019, at the Henry B. Gonzalez Convention Center in San Antonio, Texas. “With our Fall 2018 launch of our new M.S. in Human Security and Geospatial Intelligence, USC Spatial has even more GEOINT to ‘get.’ And as we say in the South, come and get it!”