On Becoming – and Being – a GeoDesign Major

Senior Courtney Fassett reflects on her USC experience with SSI

Courtney Fassett’s motivation to become a Spatial Sciences Institute GeoDesign major began before she entered USC as a freshman Presidential Scholar in the fall of 2016. In fact, her interest in the spatial sciences started years before that.

In February 2014, Courtney and her family stopped into the National Geographic Museum while on a visit to Washington, DC. Then a sophomore at Northwood High School in Irvine, California, Courtney became immersed in the NatGeo exhibits, and especially was taken in by the “Women of Vision” exhibit that was running at that time.

“At one point, we realized we had lost track of where Courtney was in the museum,” remembers her father, Scott Fassett. “She had become completely mesmerized by her first contact with the power of geography.”

Upon returning home, Courtney started googling to learn more about viewing the world through a geographic lens. She hit upon the Spatial Sciences Institute (SSI) website, which featured a video of SSI professor and founding director John P. Wilson lecturing in SSI’s general education course “The Water Planet.” The realization that USC – her parents’ alma mater – offered a robust academic and research program in the spatial sciences sent a jolt of energy through Courtney.

Then she spied on the SSI website homepage that read later that month the Institute would be presenting its annual Los Angeles Geospatial Summit, a one-day conference that brings together geospatial undergraduate and graduate students throughout the Southland with geospatial industry professionals.

“Our office manager walked into my office and asked me if a high school student could register to attend our upcoming Geospatial Summit,” recalls Susan H. Kamei, SSI managing director. “‘Sure,’ I said, and then our office manager asked if I would take the call from the student, who was holding on the line. And that was my first conversation with Courtney,” added Kamei.

That phone call began what has become a tradition of Courtney and Scott attending SSI’s Geospatial Summit. At this year’s summit on February 28, 2020, the Fassetts notched their seventh year of attendance at the event that celebrated its tenth year. “The Fassetts are our longest-standing summit attendees,” remarked Kamei. 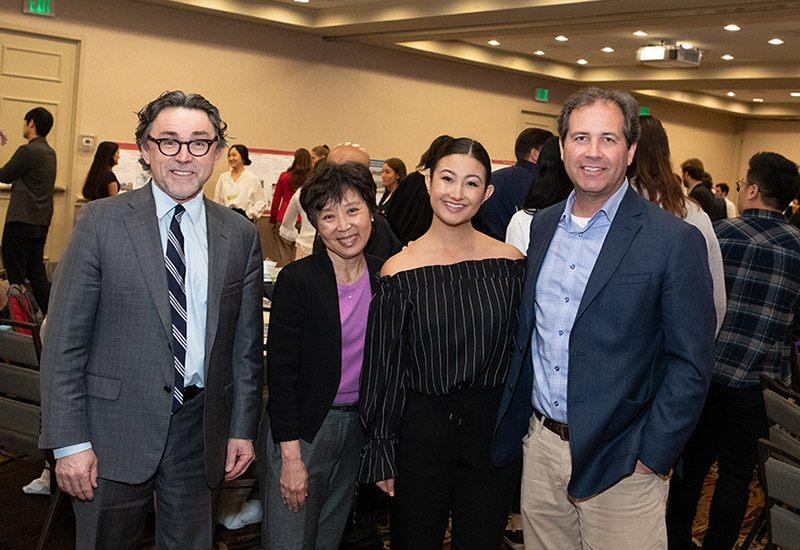 In those seven years, Courtney completed her high school education with flying colors, receiving a prestigious scholarship for high school students studying geospatial sciences from the U.S. Geospatial Intelligence Foundation in 2017. As a freshman, she joined the SSI Wilson Map Lab team as a student researcher, participating on the project that produced a 3D visualization of the USC University Park campus to support campus strategic planning and emergency response initiatives.

During her four years as a B.S. in GeoDesign major, Courtney also has had internships with VIZIO, Inc., a producer of televisions and other electronic devices, and the Office of the Mayor of Los Angeles. In these internships, she has specialized in applications of geospatial solutions and data visualization to predict consumer behavior.

She has rounded out her undergraduate experience with a double minor in Spanish and Applied Analytics. Courtney had the opportunity to be a USC Del Amo Scholar, studying Spanish language, art, literature and culture at the Instituto Internacional de Madrid in Spain. In her Junior Year, she became passionate about acquiring a proficiency in machine learning programs to complement her projects with spatial analysis, leading to her second minor in the USC Viterbi School of Engineering. On campus, Courtney has served as the Senior Public Relations Intern at the USC Dornsife Admissions office and has taken leadership roles in her sorority, Delta Gamma.

Following her graduation from USC in May, Courtney will join the Los Angeles office of Deloitte Consulting as a business technology analyst in their Government and Public Services practice.

“Being a GeoDesign major has been an amazing experience,” said Courtney. “I am so grateful to the entire SSI community for having made my USC years so memorable. I have been so inspired by the Spatial Sciences Institute leadership, faculty, staff, and my fellow students and am excited to have this foundation of geospatial sciences and technology, coupled with a liberal arts education, as I try to go out and make a positive difference in the world,” she added.

“The warmth and support from everyone in the Institute has been remarkable and impressive at every step of Courtney’s journey,” observed Scott. “It’s truly been an example of the Trojan Family – it’s the SSI Trojan Family.”

To learn more about the SSI B.S. in GeoDesign program, other undergraduate majors and opportunities for undergraduate research with SSI faculty, visit https://spatial.usc.edu/undergraduate/b-s-in-geodesign/ or contact Ken Watson, SSI director of academic programs, at watsonke@usc.edu.