SSI Director Dr. John Wilson will add "Fellow" to his accolades at the upcoming meeting  of the University Consortium for Geographic Information Science, to be held in Pasadena in May.  The academic organization will recognize Wilson for "his early research in terrain representation and analysis as well as his leadership at envisioning new directions for GIScience education and research in the 21st century." 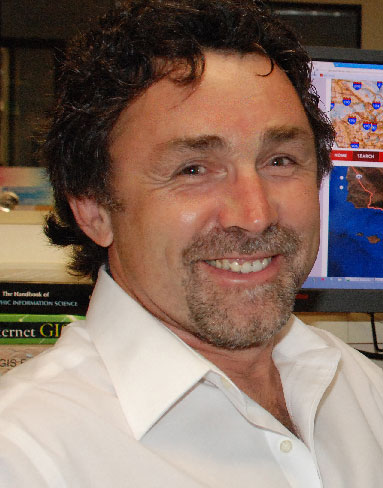 Professor John Wilson has been elected a Fellow of the University Consortium for Geographic Information Science.

Wilson's influence in the realm of landscape analysis is exemplified by the text Terrain Analysis (Wiley, 2000), co-edited with John Gallant, in which he co-authored 5 of the 17 chapters.  The book has become the reference text in the field of digital terrain analysis, drawing from the work by Wilson and colleagues on software to analyze both grid-based and contour-based terrain models.

In the past three years, Wilson has led the Spatial Sciences Institute through a period of remarkable growth, which has included the establishment of a new undergraduate major—the world's first B.S. in GeoDesign, an undergraduate minor, and new tracks in the successful M.S. in Geographic Information Science and Technology, which is taught online.

Dr. Wilson will be inducted alongside Scott Moorehouse, the lead software architect at Esri, and Dr. Hanan Samet, of the University of Maryland's Computer Science Department and its Institute of Advanced Computer Studies.