Through Space and Time

Spatial sciences enables us to see and understand our world in new ways, whether through the lens of the past, the present or the future. 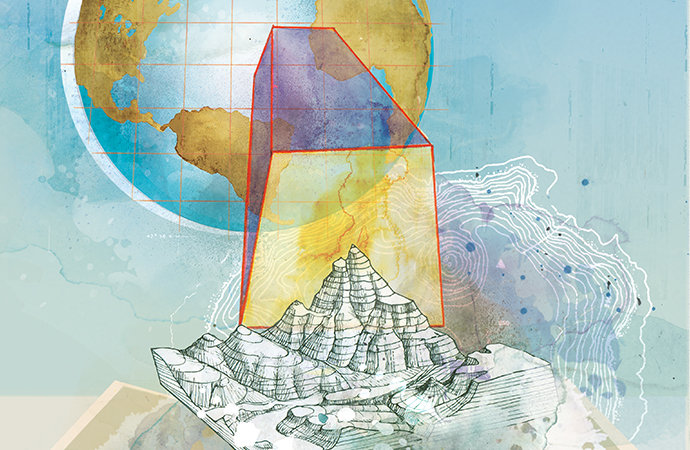 Captured by the crew of Apollo 17 in 1972, “The Blue Marble,” a photograph of Earth viewed from 28,000 miles above, is one of the most reproduced images in history. Its enduring popularity lies in the fact that, for the first time, it gave us the possibility of looking at Earth from afar, thus seeing it as a whole.

“It offered a totally different perspective. And that’s what spatial sciences do — they give us a whole new perspective on the world,” said John Wilson, professor of sociology, civil and environmental engineering, computer science, and architecture.

Spatial science is now an indisputable part of our daily lives, something we take for granted when we turn to Google Maps on our smartphones to find the nearest coffee shop, or use the GPS in our cars to navigate an unfamiliar city. The use of geospatial technology is becoming increasingly common as spatial scientists forge new contributions to our understanding of the world around us through spatial data acquisition and analysis, modeling, and mapping. Current uses include disaster relief management, urban planning and ecology, conservation, sustainability, military intelligence, environmental and human health care outcomes — even the development of more realistic video games. And that’s just the tip of the iceberg.

Wilson founded the USC Dornsife Spatial Sciences Institute (SSI) in 2010, when the discipline was in its relative infancy. From the start, his vision for the institute was grounded in the idea of intellectual leadership.

“My strategy has always been to have the bravery to say, ‘This is the way in which academe needs to evolve and we’re going to demonstrate that.’ I don’t think you win many accolades by copying. Rather, my vision grew out of the question: How can we build a spatial sciences institute that will be as relevant in its impact five or 10 years from now as it is today?”

His conclusion? Innovation is the key.

“Our research and teaching must be both cutting edge and actionable,” he said. “We want academic programs that provide expertise and training that people can take and apply wherever they want, more or less instantly.”

The success of this strategy can be seen in the long list of SSI graduates and faculty who are improving the world in visionary ways. Graduate student Kelly Wright, for example, is using her online training in geographic information science and technology (GIST) to fight tungiasis, a painful, debilitating and disfiguring disease that affects the lives of millions of the world’s poor.

Nathan Novak, a 2016 graduate of the GIST master’s program, completed a prize-winning thesis project that explored how new sensors can help us understand the ecology of sperm whales by using a range of geospatial data to map their movements in the Gulf of Alaska. Novak successfully turned his research into an internship and then a permanent job as a geospatial technologies manager.

A recipient of a recent grant from the National Endowment for the Humanities, Yao-Yi Chiang, assistant professor (research) of spatial sciences, is creating map-processing software that libraries can use to automatically catalogue map collections, thereby making the information they contain more accessible to researchers and the public.

“Maps record changes in human societies and our physical space over a long period of time. But most of these maps exist only on paper sitting in libraries, archives and museums, and technology can’t yet find them, let alone integrate them automatically,” Chiang said. “Our work can potentially unlock a world of long-term historical information for scholars across many fields.”

Wilson illustrates the relevance of spatial sciences by asking interlocutors to think of traditional disciplines as cups of coffee. Spatial science, he says, is the cream.

“We’re figuring out when to add a little to the coffee, and make the sum of the parts bigger and better than the original. In most fields — at some time, in some way — spatial sciences will add value. It’s all about collaboration.”

Rather than building a spatial sciences degree, Wilson chose to create a bachelor’s degree in geodesign in partnership with USC Price School of Public Policy and USC School of Architecture.

“Our geodesign degree focuses on collaborative decision-making and looks to the future rather than the present or the past. It is the first program of its kind in the world and people are now copying us.”

In 2014, SSI launched two online graduate certificates — in geospatial leadership and in geospatial intelligence — and added a GeoHealth track to Keck School of Medicine of USC’s online MPH degree. A year later, the institute began offering a new M.S. degree in spatial informatics with the USC Viterbi School of Engineering. In 2016, SSI launched an interdisciplinary Ph.D. in population, health and place with Keck School of Medicine and USC Dornsife’s sociology department, and a new human security and geospatial intelligence minor with the School of International Relations.

“All these academic programs speak to problem solving, interdisciplinary opportunities and the future,” Wilson said. “They all speak to training young men and women, who we have every expectation will go out in the world and make a difference. That was our vision from the get-go.”

This vision is also strongly connected to service. The institute has formed relationships with a range of influential professional organizations with the view to creating a series of regular, multiday workshops around specific problems and places. Wilson’s idea? To bring citizens, experts, students and faculty together to find common ground and suggest solutions — from how to deal with the aftermath of a major storm or nuclear accident, to working toward creating green infrastructure or ending endemic poverty.

“These are major problems, but they’re also opportunities for us to engage and work with our students to help find solutions,” Wilson said. “That’s the next step: more community outreach — not just locally, but also nationally and internationally.”