For the farmers of the Kona Region of Hawaii, specific knowledge about rainfall patterns and variability is critically important, especially in a period of environmental change.  Kona is the dry side of Hawaii, with far less rain than the lush eastern side of the volcano facing the prevailing winds.  GIST student Jeff Schroeder thought that those very coffee farmers could contribute rainfall data that might be able to match or exceed the accuracy of the lower resolution maps of government agencies. 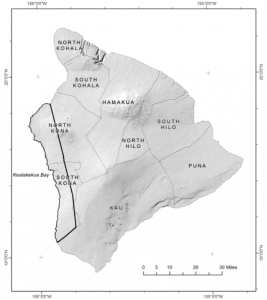 Jeff Schroeder's study area in the Kona region of Hawai'i.

This effort falls in the category of volunteered geographic information (VGI), which has been receiving significant attention from GIS researchers.  Mapping rainfall poses several challenges, not least of which is that taking accurate measurements is inherently difficult.  Could Jeff’s network of farmers provide measurements that could improve on existing maps?  Could they provide even better resolution to identify fine-scale variations in rainfall?  What would be the best way to smooth a series of rainfall observations into a single surface?

In response to widely circulated inquiries, Schroeder received 35 rainfall datasets from farmers and another 17 from other sources, including the National Oceanic and Atmospheric Administration.  After establishing the influence of altitude, slope, and aspect on rainfall totals, Schroeder investigated two methods of spatial interpolation, known as kriging to develop rainfall surfaces that fit the volunteered data.  Performance of these different approaches (ordinary kriging, ordinary co-kriging, and empirical Bayesian kriging) consistently returned empirical Bayesian kriging as the best result.  This approach adjusts the mathematical model being fit to the data in response to the fit of initial attempts, thereby improving the model parameters until the fit is maximized.

As a result, Jeff was able to produce a series of high-resolution rainfall maps for each month in the coffee farming region and compare these with other existing rainfall maps.  The high-resolution of the input data and reasonable correspondence with other maps illustrated that citizen-volunteered rainfall data were indeed sufficient to produce rainfall surfaces that can be used in climatological modeling.  Schroeder’s research joins that of recent GIST graduate Matthew Bissell in harnessing unique new volunteered geographic data to investigate biophysical phenomena.

Download Jeff’s thesis “Surface Representations of Rainfall at Small Extents: A Study of Rainfall Mapping Based on Volunteered Geographic Information in Kona, Hawaii,” completed under the guidance of Professor of the Practice Karen Kemp.