Getting from one place to another on a university campus is not always easy. It is even less straightforward if your mode of transportation does not navigate stairs. Calculating the best route from place to place in three dimensions -- from the second floor in one building to the basement of another -- requires data that is typically stored in the software used by architects and analysis tools available only in geographic information systems, and the two software systems do not communication well with each other. SSI postdoctoral scholar Dr. KyoHyouk Kim wants to solve that problem, to bring the tools of spatial analysis to the detailed floor plans and realistic three-dimensional rendering found in architectural practice.

Dr. Kim arrived at USC's Spatial Sciences Institute in 2012, already an accomplished software developer, with broad expertise in remote sensing and GIS. Armed with a Ph.D. in Geomatics Engineering from Purdue University, and a M.S. in Satellite Geophysics and B.S. in Earth and Environmental Sciences from Korea University, Dr. Kim set about a pilot project to integrate realistic 3D photorealistic visualization techniques and 3D analysis tools into CityEngine, a GIS-based virtual city modeling application available from Esri.

The difference between the CityEngine visualization and typical architectural renderings is that CityEngine is linked to a specific location in the world, so that additional geographic information can be easily brought in and used in analysis or to provide context, while many architectural rendering tools excel at visualization and building detail but do not integrate well with geographic data that might be of interest to place a building in context, or, for example, to develop a route from building to building.

Dr. Kim's next step was to develop CityEngine models that extended to the inside of buildings, taking CAD drawings and interpreting them such that CityEngine could visualize both the inside and outside of a structure.

Visualization of the exterior and interior of Allan Hancock Foundation on the USC campus in CityEngine (KyoHyouk and Wilson 2014).

Then a set of paths through and between buildings could be drawn and visualized. 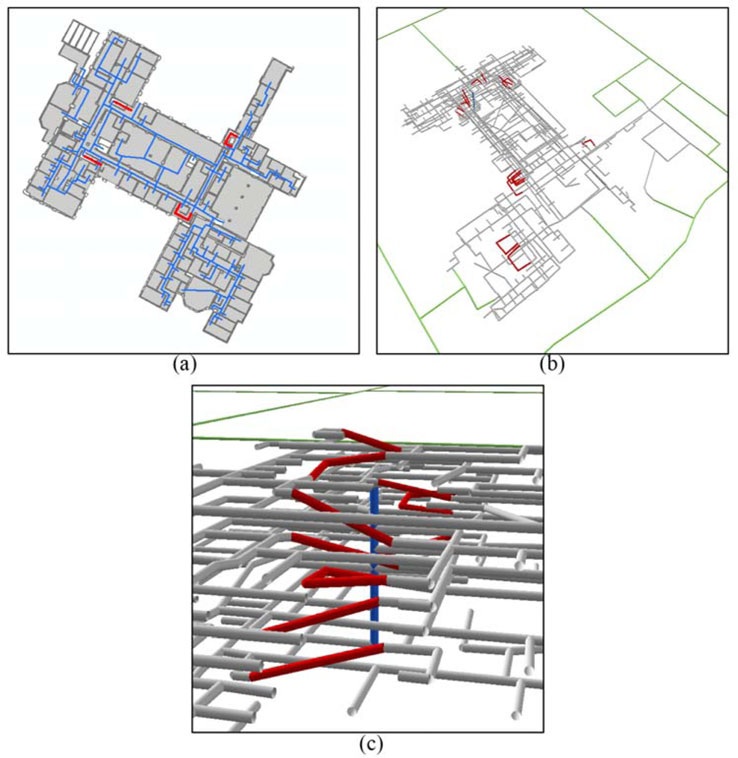 A 3D building network with staircases in red (KyoHyouk and Wilson 2014).

Then to develop shortest path routing visualizations, Dr. Kim processed the routes in ArcGIS Network Analyst and exported the results  back to CityEngine.  This research is encouraging Esri, the owners of the CityEngine software, to link these readily available ArcGIS functions to the CityEngine platform.

Dr. Kim and SSI Director Dr. John Wilson recently published the research on 3D routing in CityEngine in the Journal of Spatial Science.  Dr. Kim and members of the SSI's research and innovation team are working on a full 3D model of the entire USC campus for the administration.  Several visualizations are currently available, including a fly-through of the Wrigley Marine Science Center on Santa Catalina Island.  These are viewable at cityengine.usc.edu.

The 3D modeling work at SSI has been recognized by Esri as well. CEO Jack Dangermond included images of Dr. Kim's evacuation routing research in his keynote at the most recent Esri User Conference. 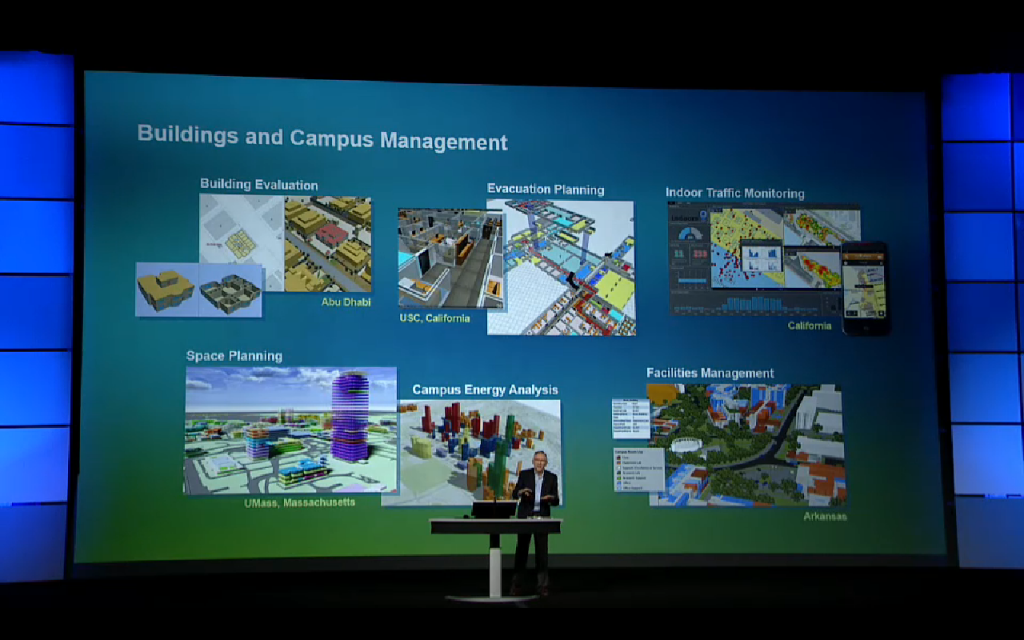 Esri CEO Jack Dangermond discussing the use of GIS in building and campus management, including Dr. Kim's research, at the most recent Esri User Conference.