Dr. Yao-Yi Chiang, Associate Professor (Research) of Spatial Sciences in the USC Spatial Sciences Institute, announced the accomplishments of two of his students in his Spatial Computing Lab.

Weiwei Duan, a Ph.D. student in computer science and spatial sciences, was one of three winners in the U.S. Geospatial Intelligence Foundation/NVIDIA’s GPU Essay Challenge.  As a student from the USC Spatial Sciences Institute, an accredited program of the USGIF, Duan was eligible to write a four-page essay answering the challenge question: “If you were given dedicated access to an NVIDIA GPU-powered supercomputer, what problems could you solve?” In her winning essay, Duan proposed a spatiotemporal predictive analysis from public data using deep learning. She and the Institute received two NVIDIA Titan Xp GPUs as the prize.

“All the applications were very professional and unveiled interesting ideas on how to use the GPUs in research and/or teaching,” said Dr. Camelia Kantor, USGIF’s Director of Academic Programs. “With such strong contenders for the award it was a difficult choice. The three winners stood out because they made a strong case for using the GPUs for the benefit of their students. Both NVIDIA and USGIF are committed to supporting educators and students in their efforts to accelerate innovation. This is just another example of how our educational system can benefit from external partnerships.” 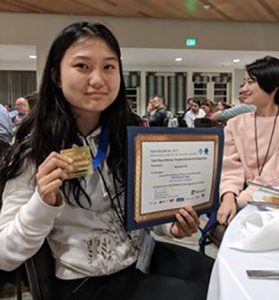 Haowen Lin, a computer science major also working with Dr. Chiang, won first place in the ACM Student Research Competition at the 2017 International Conference on Advances in Geographic Information Systems (SIGSPATIAL) for her research on “Automatic Extraction of Phrase-Level Map Labels from Historical Maps.” The competition included a short-paper submission, a poster presentation, and an oral presentation.

Recent papers published by Chiang with numerous collaborators include:

Chiang, Y.-Y., Jain, A., Bandyopadhyay, B., Knoblock, A. C., Automatic Learning of User Design Rationales from Examples. In Proceedings of the Symposium on Solid and Physical Modeling (SPM), Berkeley, CA, USA, June 2017.

For more information on Chiang’s research, email him at yaoyic@usc.edu.