What does your Twitter profile reveal about you? More than you know, according to Chris Weidemann. The GIST master’s student has developed an application that follows geospatial footprints.

You start your day at your favorite breakfast spot. When your order of strawberry waffles with extra whipped cream arrives, it’s too delectable not to share with your Twitter followers. You snap a photo with your smartphone and hit send. Then, it’s time to hit the books.

You tweet your friends that you’ll be at the library on campus. Later that day, palm trees silhouette a neon-pink sunset. You can’t resist. You tweet a picture with the hashtag #ILoveLA.

You may not realize that when you tweet those breezy updates and photos of food, you are sharing information about your location.

Chris Weidemann, a graduate student in the Geographic Information Science and Technology (GIST) online master’s program at USC Dornsife, investigated just how much public geospatial data was generated by Twitter users and how their information — available through Twitter's application programming interface (API) — could potentially be used by third parties. His study was published June 2013 in the International Journal of Geoinformatics.

“I’m a pretty private person, and I wish others would be more cautious with the types of information they share,” said Weidemann, a geospatial technology manager for a Virginia company that builds geographic information systems for the federal government. 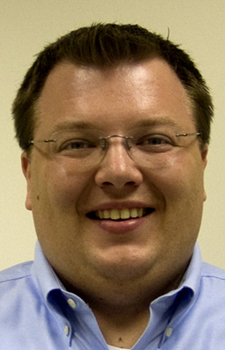 Chris Weidemann, a graduate student in the Geographic Information Science and Technology (GIST) online master’s program, used a Web application to build Twitter2GIS. His research findings were published in the June 2013 issue of the International Journal of Geoinformatics. Photo courtesy of Chris Weidemann.

Weidemann understands how data is stored and how it can be accessed. He found that location metadata from users’ profiles is more publicly available than most people realize.

Twitter has approximately 500 million active users, and reports show that 6 percent of users opt-in to allow the platform to broadcast their location using global positioning technology with each tweet they post. That’s about 30 million people sending geo-tagged data out into the Twitterverse. In their tweets, people can choose whether their information is displayed as a city and state, an address or pinpoint their precise latitude and longitude.

That’s only part of their geospatial footprint. Information displayed on their account may reveal a user’s location. Depending upon how the account is set up, profiles may include details about their hometown, time zone and language.

“There is all sorts of information that can be gleaned from things outside of the tweet itself,” Weidemann said.

To get a fuller picture of what that collection of data might reveal about a Twitter user, Weidemann developed an application called Twitter2GIS to analyze the geospatial data Twitter users generate.

Using Twitter's API and Google's Geocoding API, Twitter2GIS collects tweets from either a geographic region or a specific Twitter user. That geospatial information — or ambient data — is processed by Esri ArcGIS, a GIS software program used to map and analyze data, searching for trends.

During the sampling period, an average of 4 million Twitter users divulged their physical locations through global positioning system coordinates or other active location monitoring. Additionally, 2.2 percent of tweets – about 4.4 million tweets a day – provided substantial ambient location data in the text of their posts. 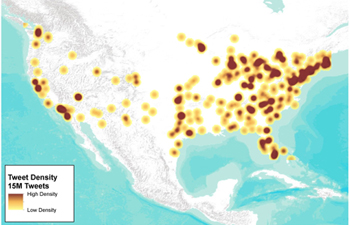 During Weidemann's sampling period, an average of 4 million Twitter users divulged their physical locations through global positioning system coordinates or other active location monitoring. This heat map shows the density of all location-enabled tweets during the collection period. Image courtesy of Chris Weidemann.

By harvesting geospatial information, corporations could potentially build profiles of individuals for marketing purposes. However, it also opens users to more malicious intent.

“The downside is that mining this kind of information can also provide opportunities for criminal misuse of data," Weidemann said.

Also, an application similar to Twitter2GIS could potentially be developed to mine data from other social media outlets.

Swift, Weidemann’s thesis adviser, said the project stood out for its thoughtful look at geospatial information. "It will help create an awareness among the general population about the information they divulge," she said.

For his master’s thesis, Weidemann is taking his application one step further and expanding it to allow Twitter users to login in with their profile credentials so they can view their own Twitter geospatial footprint. They can test out the beta version and provide feedback on the app at http://geosocialfootprint.com. Weidemann will continue to add functionality to the app over the Fall semester, such as its ability to analyze the content of tweets.

“My intent is to educate social media users and inform the public about their privacy,” Weidemann said. He is slated to complete his thesis and earn his master’s degree in December 2013.

Weidemann has a profile on Twitter, but uses it infrequently and opts out of including location information to his tweets.

When developing Twitter2GIS, he tested his own Twitter account for location information. Despite his self-described conservative Twitter use, the application was able to deduce information about the location and date of a conference he was hoping to attend based on tweets he posted that only included the event’s hashtag. He was surprised at the amount of information his app was able to extrapolate.

“This research has been fun,” Weidemann said. “And a little scary.”