Evening is falling on the ancient Maya kingdom of El Zotz deep in the dense undergrowth of the Guatemalan jungle. A dark tide of bats flows out of a large cave in the nearby mountainside as the last rays of the setting sun illuminate a dramatic series of giant blood-red masks decorating an ancient temple set atop the Diablo Pyramid. Beneath the 40-foot high pyramid lies a burial tomb containing the remains of a Maya king, found with a sacrificial blade lying where his right hand would have been.

Pure Indiana Jones, the scene has attracted widespread international attention as armchair archaeologists the world over follow the latest discoveries at the recently excavated Temple of the Night Sun at El Zotz, headed by Thomas Garrison of the USC Dornsife Department of Anthropology.

The Maya, an advanced Mesoamerican civilization, lived in what is now Guatemala, southern Mexico and Belize, in a series of city-states of varying size and power. While El Zotz was one of the smaller kingdoms, it appears to have more than made up for its size with a keen sense of its own identity and creativity.

Describing the site as “an archaeological gem,” Garrison said: “The most important thing that El Zotz has shown us is that size doesn’t matter. The architecture we are seeing at El Zotz is not only aesthetically beautiful; it’s also incredibly innovative in terms of its unprecedented decoration.”

The four-foot tall vibrantly painted stucco masks which decorate the 1,600 year-old Temple of the Night Sun depict the different faces of the Sun God, from the shark-faced early morning sun rising from the ocean, to the cross-eyed, blood-gorged noon-day sun which the Maya believed fed on blood to perpetuate his path across the sky, to the night sun, which was transported through the Underworld by the Jaguar God to rise again in the east. Archaeologists believe the solar imagery adorning the Temple was designed to link the deceased ruler of El Zotz with the power of the sun, thus venerating his memory as the founder of a royal dynasty. The deep scarlet Temple of the Night Sun was an eloquent symbol of the power of El Zotz and would have been clearly visible up to 15 miles away, particularly when illuminated by the setting sun. 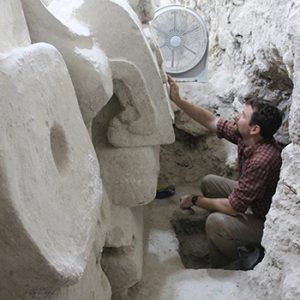 “Although the dominant imagery is solar, a lot of it represents this night sun deity and the building itself is actually oriented to the west, so that is why we call it the Temple of the Night Sun,” said Garrison. Research at the site of El Zotz began in 2006, leading to the discovery of the temple in 2009. Garrison took over as director of El Zotz from Stephen Houston of Brown University last year, when the research was featured in National Geographic, becoming the most popular discovery story on its Web site in 2012 with 530,000 visitors.

Garrison expressed excitement that The National Geographic Conservation Trust has pledged $20,000 this year to further research at El Zotz.

National Geographic spokesperson Catherine Workman said the research promises to produce new understandings of ancient Maya iconography and rulership, “as well as the conservation of beautiful painted stucco masks on the front facades of religious structures at the site.”

Garrison was also delighted that the research’s principal beneficiary Foundation of Cultural and Natural Maya Patrimony [PACUNAM] will support the project for a second year. In conjunction with the U.S. Department of the Interior, PACUNAM has increased contributions to $50,000, Garrison said.

“The support that PACUNAM gives to archaeological research in general and to the archaeological site of El Zotz in particular, is of great value to Guatemala and to the foundation, because in that way we protect our cultural resources and begin to learn more fully about the history of our forefathers.” PACUNAM spokesperson Claudia Cruz said.

PACUNAM spokesperson Claudia Rosales said that the archaeological site of El Zotz is of great value because of its strategic location just 20 kilometers west of the key Maya site at Tikal.

“The exceptional findings at El Zotz have demonstrated the importance of this site, how it allows us to understand our past and how crucial it is to conserve it for future generations,” Rosales said.

Garrison is set to return to El Zotz in May with three USC Dornsife archaeology undergraduates to continue work on excavating a second temple at the site. Garrison and his international team of 75 hope this second excavation will shed light on a grand overall plan for art and architecture at El Zotz.

“So often when we find a spectacular building we dig it and analyze it in terms of itself, what is buried underneath it and what it shows,” Garrison said. “I would like to look at a series of these buildings rather than a single structure and see whether there was a grander design to everything.

“I think there was.”

When Garrison, his students and the rest of his team head to El Zotz at the Spring semester’s end, they will be racing against the clock before the rainy season begins and threatens disruption to their supply route along a rugged jungle road. However, as Garrison pointed out, thanks to traditional Maya construction methods, the dig itself has now progressed to a stage where the team can continue working despite the rains.

“We are fortunate that when the Maya wanted to expand a pyramid, rather than building another one, they simply built over it, rather like Russian Matryoshka dolls. This means that we are protected from the rain. It also means that the further we tunnel in, the further back we are traveling in time, so these beautiful structures we are currently excavating are some of the earliest ones built at El Zotz.” 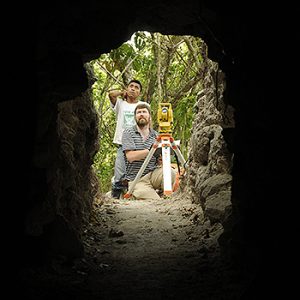 Garrison maps the entrance to a tunnel that leads to the Temple of the Night Sun. Photo by Arturo Godoy, reproduced courtesy of Proyecto Arqueologico El Zotz.

One of the USC Dornsife students who will be accompanying Garrison to Guatemala in May is sophomore Rachel Jones who is pursuing a double major in political science and archaeology.

“Not only am I getting to work with Thomas Garrison, one of the best in the field of Mayan archaeology, but the field experience and the things I will learn will be a great addition to the classes I've taken here at USC. El Zotz is such an important site in terms of Mayan culture, heritage and belief that it’s going to be an amazing experience.”

In addition to being an expert on the Maya, Garrison, a lecturer, also specializes in Geographic Information Systems (GIS) and works closely with the USC Dornsife Spatial Sciences Institute. In his research at El Zotz, he is particularly interested in the site’s regional setting, its unique orientation and the relationship of the architecture to the landscape.

Garrison hopes that GIS and remote sensing equipment will reveal details of an ancient sacred landscape in much the same way that this technology helped archaeologists understand Stonehenge. “I think it’s the application of technology to the archaeological record that’s going to help us to advance past our traditional interpretations here.”

As well as working out a grand design for a sacred landscape at El Zotz, Garrison and his team would like to get answers to specific questions about this small Maya community, particularly during the Early Classic period from 300 to 600 CE when it was operating at the zenith of its independence and creativity.

“We are hoping to learn more about the origins of this place,” Garrison said. “Why did these Maya rulers decide to put it there and what was it like when they were independent? But the question we would most like answered is: ‘Who exactly were the kings of El Zotz?’”

Such information is easier to come by at larger sites, such as Palenque in Mexico, where a plethora of texts exist naming rulers. At small sites, where there was less interaction with the outside world and few texts exist, archaeologists often rely on items naming the rulers which were placed inside their tombs. However, those do not always survive. This was the case at El Zotz where numerous tombs fell victim to looters in the ’70s.

“When things are cleaned out there is a certain amount of information that is lost forever and that is a great frustration,” Garrison said.

However, when it comes to looters, Garrison and his team manage to look on the bright side. “To be frank, it would have taken us years to dig those tunnels as far as the looters did, so we use the illicit investigations to learn as much as we can and guide our own excavations”

The excavation of The Temple of the Night Sun also yielded several gruesome discoveries. As the archeologists were digging down to the site of the burial tomb they unearthed a series of stone vessels, each containing a severed human finger. The last pot, slightly bigger than the others also contained a black obsidian blade, which Garrison’s team believed was “the finger-removing implement.”

If further proof was needed that archeologists — like forensic scientists — need strong stomachs, the team made an even more heart-rending discovery as they neared the location of the king’s tomb and uncovered the remains of six sacrificed children aged between one and five years old, which had been placed in large bowls and then each covered with a second, upturned bowl  From the condition of the remains and signs of burning around the edges of these lip-to-lip caches, the archaeologists deduced that the children had been set alight. However, it is still unclear whether this happened before or after their deaths, or indeed how they were killed. A large, black obsidian knife, found where the king’s right hand would have been and believed to possibly be the sacrificial weapon, is currently in Japan where it is undergoing analysis for blood traces.

In addition, the remains of a four more children were found at the site, a particularly high number of child sacrifices for the Maya.

The archaeologists were able to glean more information than they had expected from the royal burial because the tomb was located deep underground beneath the pyramid and was extremely well sealed.

“In fact when we opened the tomb it still smelled of decay, which is unusual. One of the reasons this discovery in 2010 was so incredible was that things like textiles were still preserved, which in a jungle environment is almost unheard of.”  Indeed, textiles recovered from the tomb still showed the weft and weave of the fabric worn by the dead.

Other valuable discoveries included 23 pots which were found in the tomb, six or seven of which were of museum quality. Two rare jade masks — considered some of the most sought-after and rarest artifacts in Maya archaeology — were also found adorning the king’s burial robe.

By examining animal remains and ancient pollen found at the site, archaeologists are able to reconstruct the ancient environment and work out what the Maya were cultivating and eating.

“We found arrowroot, which we weren’t really expecting to find, and all sorts of fruits and vegetables,” Garrison said. “The Maya are the people who domesticated chocolate. They also made a corn-based liquor which they would have used during feasting.”

While Garrison dismisses the recent 2012 doomsday scare, he welcomes the attention it brought to Maya culture.

“I saw it as an opportunity. Since Mel Gibson’s 2006 Apocalypto movie, throughIndiana Jones and the Kingdom of the Crystal Skull and the misguided 2012 prediction, people have been interested in the Maya. It provided an opportunity for people to talk about it, and in that sense, overall I think it was a very positive thing.”