“I can think of no one more qualified than Jack Dangermond to help us launch this important new institute with its lofty aspirations and goals,” said John Wilson, professor of sociology and director of the USC Spatial Sciences Institute housed in USC Dana and David Dornsife College of Letters, Arts and Sciences.

Established in July 2010, the institute was founded to promote spatial thinking, analysis, and modeling, research, visualization and outreach across USC.

Dangermond, an icon in the GIS community, articulated the extensive capabilities of geoprocessing systems before a large crowd at the Ronald Tutor Campus Center.

“Today our world has a lot of problems to solve that we face in almost every discipline — environmental climate change, designing more livable cities, ending poverty and hunger — almost all of it has to do with a spatial dimension,” said Dangermond, who sprinkled humor throughout his talk. He is the recipient of 10 honorary degrees, several awards, fellowships and grants.

Dangermond explained that his interest in using spatial science to solve problems began when he was captivated by computational geography while pursuing his master’s degree in landscape architecture at Harvard University’s Graduate School of Design. The field, centered on abstracting geography into computers to make maps and apply them to a range of areas, laid the foundation for Dangermond and his colleague’s later work. 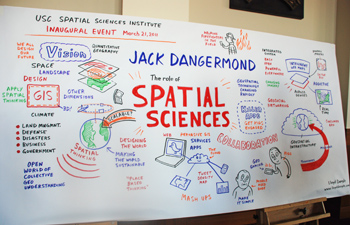 An art piece drawn by Lloyd Dangle to memorialize the inaugural lecture will adorn a wall in the USC Spatial Sciences Institute. Photo by Ambrosia Viramontes-Brody.

In 1969, Dangermond with wife, Laura, established Esri in Redlands, Calif. What began as a small research group has grown to an organization of 3,100 employees boasting the largest GIS software installation base in the world. Today Esri is the world’s fourth largest privately held software company and is known internationally for GIS software development, training and professional services. The technology used by more than one million users in 300,000 organizations worldwide manages, analyzes and shares location-based information for better decision-making.

“Spatial thinking is pervasive from very small things to the whole planet and the universe,” Dangermond said. “While this is geography based it is pervasive across physical and cultural sciences into almost anything we do; at this point in my life I think it is in everything.”

Geodesign, the notion of linking geographic knowledge with the design process, may be the answer to creating a more sustainable planet, he noted. By using measured information, planners can form creative solutions based on the data for better social, military and utility planning. From understanding health risks associated with various exposures, evaluating real-world problems to best planning practices, GIS enhances research across multiple disciplines.

Dangermond pointed out that several agencies use GIS to map densities, quantities and data in a specific area, map change in an area to anticipate future conditions, or plan a course of action or evaluate the results of an action or policy to see the impact. The prevalence of geospatial technology is seen in U.S. Federal and national mapping agencies, along with several other industries.

Visitors to sites such as www.recovery.gov and www.crimemapping.com can click on maps to obtain data on crime rates in specific neighborhoods or learn where the government is spending money. The technology allows users to share information through geosocial networking or learn about environmental changes. One example is an interactive map available at www.esri.com that has been created to document the hardest hit areas by the recent tsunami in Japan. With a few clicks, users can scan layers of data, read tweets, view videos or pictures uploaded from those at the scene.

During the event’s question and answer portion, Dangermond emphasized the importance of continued research and garnering public participation in spatial sciences.

“His life is his company and he has done a fantastic job,” Wilson said. “He lives the vision that we would like to create here.”

Laura MacDonald, a graduate student in the USC School of Architecture, decided to pursue a Geographic Information Science & Technology certificate through the institute after working as an archeologist for six years.

“GIS is a very valuable skill to learn both in archaeology and city planning,” she said. “I really hope to do professional grade mapping.”

“This sums up what the Spatial Sciences Institute is all about. We want to help students to develop their spatial thinking and reasoning as well as their technology skills,” Wilson said. “The goal going forward is to develop and support a variety of academic programs to empower students to think and reason about our world in a spatial framework because place matters and understanding this may help them to identify innovative solutions for some of our most vexing social, economic and environmental problems.”