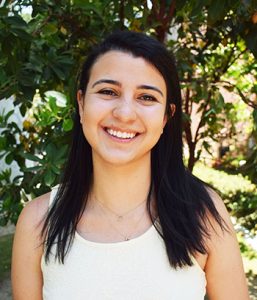 Alanna Schenk has received a 2019 – 2020 Fulbright award  to study in the Master of European Studies program with an Arctic Specialization at Aalborg University in Aalborg, Denmark.

Schenk is graduating USC in May 2019 with a B.A. in International Relations and a minor in Human Security and Geospatial Intelligence (HSGI) offered by the Spatial Sciences Institute. As a USC undergraduate student, Schenk has been working to recognize and ameliorate human rights violations through geospatial technologies. In particular, Schenk has developed new geospatial technologies using imagery captured from satellites to support humanitarian operations during armed conflicts and natural disasters.

Under the direction of COL [R] Steven D. Fleming, Ph.D., professor of the practice of spatial sciences, Schenk expanded her knowledge of geographic information sciences and remote sensing and participated in research related to global interconnectivity and society. Her experiences led to the design of a research project that collectively integrated work done by USC’s Spatial Sciences Institute and the United Nations Educational, Scientific, and Cultural Organization (UNESCO). Her research on the impact of geospatial technology on human rights and religious genocide used Esri’s ArcGIS and the Global Terrorism Database (GTD) to detect points of religious conflict around the world. The project aimed to see if there was a correlation between government restrictions on religion with sectarian violence.

As evidence that Schenk’s research has made an important intellectual contribution to the use of geospatial technology to validate human rights violations, the inaugural issue of the USC-UNESCO Journal for Global Humanities, Science & Ethical Inquiry published her article on this work in April 2019. As a USC-UNESCO fellow, Schenk is concluding a six-month internship with UNESCO in Paris, France, during which she has been focusing on the ethical dimension of emerging science and technology advancements.

As a Fulbright scholar, Schenk will take courses at Aalborg University to more comprehensively understand the dynamics between Danish society, its politics and its relationship with the Arctic. She also will be conducting independent research on improving the relationship between private industry, policy makers and indigenous communities in Greenland.

The Fulbright U.S. Student Program for Study/Research Awards are considered to be among the most competitive and prestigious national fellowships for study and research abroad and are awarded for academic achievement and commitment to cultural engagement. The Fulbright program is a flagship program of the U.S. Department of State’s Bureau of Educational and Cultural Affairs.

“We are very proud for Alanna and congratulate her on receiving this great honor,” said Dr. Fleming. “She has consistently met my high expectations of young adults, striving to learn how to leave this world better than they found it. It truly has been an honor to watch her mature. The Fulbright scholarship program will do well by her as a graduate student.”

Schenk said, “I am incredibly excited. With this opportunity, I hope to ultimately contribute to a system where local Arctic communities can take an active role in regional resource management plans. I am very grateful to Dr. Fleming and the Spatial Sciences Institute for all the help over these past few years that have enriched my undergraduate experience at USC and made this opportunity possible.”

In recognition for the research she conducted with Dr. Fleming, Schenk also is graduating with the distinction as a USC Discovery Scholar, awarded to students who excel in the classroom while demonstrating the ability to create exceptional new scholarship or artistic works. In addition, she is graduating with the designation as a Levan Scholar, an honor given to those USC undergraduates who exemplify engagement with and contribution to the core values of humanity and ethics in their undergraduate experience.

Schenk also has received one of USC’s top graduation honors, selected as one of the ten $10K Global Scholar prizewinners. The Global Scholars distinction recognizes USC undergraduate students who have excelled in their studies both at home and abroad.

Schenk is the second USC Spatial student in two years to win a Fulbright award. She follows Alejandro Schugurensky, who received a 2018 – 2019 Fulbright study/research award to investigate the impact of social policies on educational inequities in Brazil. Starting in the fall of 2019, Schugurensky is starting his Ph.D. studies in Sociology at Princeton University, with the goal of working in the field of sociological research, with a particular interest in social stratification and the sociology of education. Schugurensky graduated USC in 2018 with a degree in Sociology and minors in Spatial Studies and Education and Society.

USC is one of the universities which produce the most number of Fulbright winners. Learn more about the accomplishments of USC Spatial Science Institute students here.