Designs re-envisioning the Los Angeles River and weaving networks of new public spaces in some of the most park-poor regions of Los Angeles are currently on display at Los Angeles City Hall.  SSI Faculty Affiliate and  Assistant Professor of Architecture Alexander Robinson directed the installation, which features work from his studio class focusing on the Bowtie Parcel along the Los Angeles River.  Robinson, and other faculty in the Master of Landscape Architecture program, extensively use spatial data, such as building outlines, contour lines and digital elevation models, and all manner of data on infrastructure, human populations, and the physical and natural environment. 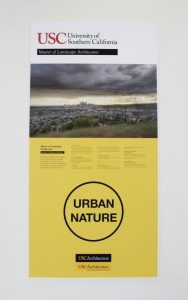 MLA students Leigha DelBusso, Chuan Ding, Nicole Ives, Brendan Kempf, James Lively, and Sandra Wong produced the exhibit, which includes video screens showing hydrological performance tests for alternative designs for a segment of the Los Angeles River that were undertaken with a physical model in a flume at the USC campus.  The installation will be on the bridge between Los Angeles City Hall and City Hall Annex through August.