A new interdisciplinary undergraduate degree in GeoDesign offered through USC Dornsife’s Spatial Sciences Institute is the first of its kind in the world.

Population growth, rapid urbanization, meeting water and energy needs, biological conservation and climate change — these are some of the most difficult and enduring challenges facing the world today.

Finding innovative solutions to these problems — and many others — is USC Dornsife’s Spatial Sciences Institute (SSI), which this Fall launched a bachelor’s of science degree in GeoDesign. The new major trains students in design, planning, geographic information science and geospatial technologies. It provides students with valuable skills so they can pursue professional careers and/or graduate study in one or more of these three fields as well as a variety of environmental areas.

Created by John Wilson, director of SSI, the degree is a joint project among USC Dornsife, the USC School of Architecture and the USC Sol Price School of Public Policy.

Wilson, professor of spatial sciences, sociology, civil and environmental engineering, computer science and architecture, is among the world’s leading scholars in spatial sciences.

“Geographers are good at describing how things got to be the way they are but they do not too often extend themselves to think about what could be,” said, Wilson, who originally trained as a geographer and is the founding director of the 3-year-old institute.

“Architects and landscape architects focus on what could be and tend to pay less attention to what has been and what is now. Geographers also tend to look at whole cities or regions, or the ways in which groups of cities are connected to one another, while architects often focus on individual parcels of land. And, of course, planning and planners are important because they provide the frameworks and protocols used by all of us to transform plans and ideas into tangible outcomes.”

It is not hard to see why it is sometimes difficult to connect these three fields in terms of space and time. The new GeoDesign degree aims to bridge those gaps by incorporating architecture, geographic information science and planning into one program designed to be greater than the sum of its parts.

“My vision for this degree is that it will be a win-win-win situation for students in each of the three schools involved,” Wilson said.  “Each of the three partners brings strengths that will need to be adopted by the other groups in the future.”

Many of the new classes will use a studio framework and iterative learning — a teaching philosophy Wilson borrowed from architecture and planning. “We’re not going to be in a regular classroom with a talking head at the front and students sitting in rows of chairs,” he said. “Instead, we are adopting a contemporary framework with a lot more student-faculty interaction within a space that is conducive to that process.

“On the flip side, the Spatial Sciences Institute brings to planning and architecture the ability to assemble, organize and visualize lots of different data.”

To help students understand the relationship between form and function, one of the Architecture studio classes, for example, will focus on Broadway, a historic street in the heart of downtown Los Angeles. Eighty years ago, this bustling thoroughfare with its ornate movie palaces, upscale shops and mixed-use apartment living, was the vibrant commercial center of L.A. life. In recent decades, it has fallen into disrepair, deteriorating into a tawdry shadow of its former glory. Today, Broadway is regaining some of its lost polish as movie theatres are restored and historic buildings are repurposed for lofts and condos, drawing a different population back to the area. 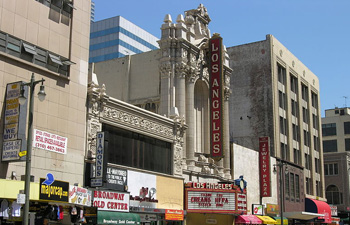 Using resources in architecture, planning, geographic information science and geospatial technologies, students in GeoDesign will undertake projects such as mapping the evolution of Broadway, a historic street in the heart of downtown Los Angeles.

GeoDesign students will have the opportunity to use resources from all three schools to undertake various projects such as mapping the transformation of Broadway’s built environment over time, or looking at how open space or transit investments can help to revitalize existing neighborhoods.

“We have also built a GeoPortal that gives access to L.A. County’s GIS data, so we have all of the county’s aerial imagery, their roadways, bicycle paths, parks, parcel data and many other valuable datasets like the census information, which includes population, employment, income, number of children, age distribution by census block group or census tract or ZIP code,” Wilson said.

The final capstone of the degree will be team-taught by faculty from each of the three schools and will ask students to try to solve a real problem involving a real client.

The new major is already attracting national and international attention.

“It has taken 18 months to launch this degree. I see several other schools in the United States, Asia and Europe copying us by starting their own bachelor’s of science degrees in GeoDesign,” Wilson said.

Freshman Shan Yu Chuan from Sian, China, is one of the first undergraduates to seize the opportunity to major in GeoDesign at USC.

“Earth science is interesting to me because I have always been curious about the interrelationship between human beings and planet Earth,” she said. “GIS is the cutting-edge, essential technology for studying the environment, so this major will provide me with the skills I need to utilize this tool for future research.”

She is particularly excited about her “Maps and Spatial Reasoning” class. “I have a great passion for maps because they are beautiful and can convey a lot of information,” she said.

The class is taught by Darren Ruddell, assistant professor and director of undergraduate Studies at the Spatial Sciences Institute.

“There’s a real desire on the part of the students to address existing societal challenges,” Ruddell said. “It’s inspiring to see how motivated the students are to learn these skills so they can tackle issues like water resource management. This degree is cutting-edge, brand new and there’s a huge need for it, which all go to make it particularly timely and exciting.”

To build interest in the degree, Wilson and Ruddell are organizing a local GIS Day event at the University Park campus on Nov. 20. Students and faculty are invited to attend the 90-minute event, which will feature an information session with faculty members from the GeoDesign major, followed by a demonstration of geospatial technologies on the north side of Alumni Park in front of VKC featuring a weather balloon equipped with a camera which will be used to take aerial images of the University Park campus. This method is an example of how GIS users obtain the most up-to-date information to develop a site survey which can then be used for urban planning and design, including repurposing.

“We hope this will help students learn more about different programs we offer and how they might be relevant to what they are doing,” Wilson said.

Wilson stresses the growing global importance of GIS, now a $750 billion industry with millions of users.

“GIS is widely described as a fundamental infrastructure that supports modern life,” he said.

“When I first became interested in GIS, I went to a user conference in 1987 and there were about 125 people,” Wilson said. “Now there are 17,000. The best days for geographic information science and the accompanying geospatial technologies are definitely still ahead of us.”