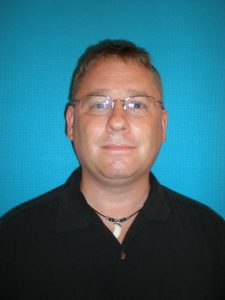 GIST student Shawn Baldwin has received a scholarship from the Geospatial Intelligence Foundation.

The United States Geospatial Intelligence Foundation (USGIF) has awarded USC GIST student Shawn Baldwin one of its 2012 graduate student fellowships.  Recipients of the highly competitive $5,000 awards are selected by an independent panel of geospatial intelligence professionals.  All awardees are invited to participate in the annual GEOINT symposium, to be held this year in Orlando, Florida in October.  Shawn’s award marks the second year running that a student from the USC GIST program has received this prestigious award.

GIST student Shawn Baldwin has received a scholarship from the Geospatial Intelligence Foundation.

Shawn is a geospatial analyst and cartographer in Orlando, Florida where he works on mapping projects supporting flight and vehicle simulation training programs. As a certified GISP, Shawn has worked in cartography since 1995 on projects ranging from production cartography to gazetteer development for natural language processing technology. He expects to earn his MS in Geographic Information Science and Technology in 2013.