Should shipping lanes be adjusted to avoid collisions with bue whales?  Typically, the answer to a question such as this would come from scientific surveys, carefully designed and implemented.  But GIST MS student Matthew Bissell had a different idea.  He knew, from his work as a deckhand on whale-watching excursions for the Ocean Institute in Dana Point, California, that vessels such as his held a trove of data in the captain’s logs, in which each whale siting was recorded with species and location. These data would be invaluable for research, if only they could be obtained.  So that’s exactly what he did, reporting preliminary results at the USC Environmental Sustainability Research Network poster competition this past Friday. 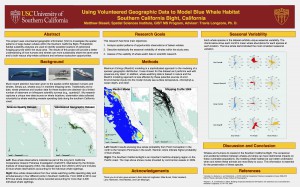 Bissell then developed a habitat suitability model for blue whales, finding that their distribution on a monthly basis was influenced most by bathymetry, followed by chlorophyll and sea surface temperature.  The habitat model was then compared to shipping activity.  He also developed detailed descriptions of the seasonal patterns in whale observations by species.

The study is positioned to influence both policy to reduce ship collisions with protected species and to help eco-tourists to decide when and where to plan to see individual whale species.

The USC Environmental Sustainability Research Network was established in 2012 to foster sustainability research at USC, with a focus on policy responses by business and government.  The poster competition was part of USC’s Earth Week activities.