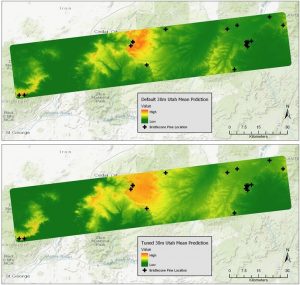 Cass Kalinski (M.S. GIST ’19) has recently won not one, but two prestigious awards for his thesis “Building Better Species Distribution Models with Machine Learning: Assessing the Role of Covariate Scale and Tuning in Maxent Models” that he produced in the USC Spatial Sciences Institute M.S. in Geographic Information Science and Technology Program.

The UNIGIS International Association (UIA) recently announced that Kalinski is the winner of its 2019 Academic Excellence Prize for his thesis, in which he investigated Maxent as a widely used tool in the area of species distribution modeling and created innovative protocols and data processing scripts for data preparation in ArcGIS Pro to insure the precise spatial alignment required by Maxent model tuning.

In his thesis, Kalinski examined two factors of Maxent modeling, performance impact of covariate scaling and the results of model tuning on Maxent species distribution models, evaluating two questions related to these factors. Do higher resolution covariates yield a better performing Maxent model of potential habitat extent? Does a tuned Maxent model yield a better performing model of potential habitat than a model using the default Maxent settings? Two approaches to Maxent modeling, default parameters and tuned parameters, were used at two different covariate resolutions, yielding four evaluation models. He used presence data for bristlecone pines (Pinus longaeva) as the species example for the evaluation. Covariates were selected that are relevant to the species. These were scaled to match the two study resolutions. Model tuning was performed using the ENMeval R package. Quantitative and qualitative evaluations of the resulting models demonstrated improvements in the model performance in the tuned models. Results from the resolution aspects of the study were less conclusive. Issues with the quality of certain aspects of the climate and elevation data raises questions about the certainty of results at either resolution.

On behalf of Jacek Kozak, president of the review committee, UIA’s Regina Hatheier-Stampfl indicated that the criteria used to evaluate the theses submitted for consideration by the universities in the UIA consortium were technical quality, quality of literature review, relevance, presentation and originality. The Prize, initiated in 2008, recognizes the best master of science thesis or paper during the academic year among those nominated by the world’s leading academic programs in geographic information science and systems.

Although the standard of the theses submitted was very high, Hatheier-Stampf noted that the review committee was unanimous in recognizing Kalinski’s thesis as the best thesis of the year. In recognition of this award, Kalinski received a certificate, a trophy, and an 800-euro prize.

Kalinski is the sixth USC M.S. GIST student who has won a UNIGS Academic Excellence Prize.

In addition, the Spatial Sciences Institute has named Kalinski the winner of the 2020 USC Esri Development Center Student of the Year competition for his novel and highly effective use of Esri’s GIS tools. The SSI faculty committee described Kalinski’s work as advances that provide a new, integrated framework that can be leveraged to create robust species distribution models. In addition to creating this framework, he also introduced other innovations in this study, including use of ClimateWNA (cWNA) to provide scaled climate data for the models, and providing expert climate data interpolations while reducing data preparation difficulties.

Dr. Jennifer Swift, associate professor (teaching) of spatial sciences and the USC SSI program director for the EDC, explained, “The novelty of Kalinski’s work is in the programming he developed that mitigates many common pitfalls of Maxent modeling. The committee felt that Cass’s robust approach to the problem provides a public service and social benefit in the advancement of species distribution models currently used by a diverse scientific community, including biologists, land and wildlife managers, environmental scientists, and many other disciplines.”

In recognition of this award, Kalinski’s name will be inscribed on a nameplate on a perpetual plaque displayed in the Spatial Sciences Institute. He also will receive a small cash prize from Esri, the opportunity to present at the 2020 Esri Developer Summit, and will be considered in Esri’s 2020 International EDC Student of the Year competition.

Kalinski said, “The USC M.S. GIST degree program was one of the most rewarding endeavors of my career. It was an unexpected and profound honor to receive the UNIGIS and the EDC Student of the Year Awards to cap off the experience. I owe much to the USC professors and staff who provided superb teaching, guidance and support. I especially would like to thank Dr. Karen Kemp, my thesis advisor as well as the professor for two of the courses in the program. Without her help and advice, I would not have made it past several roadblocks. The research was challenging, with many long, frustrating days, but also so rewarding when we had those ‘aha’ moments.”

Spatial Sciences Institute Founding Director and Professor John P. Wilson said, “Cass joins the ranks of five other outstanding alumni from our M.S. GIST Program whose leading-edge research has been recognized with this prestigious international award. We are thrilled that the rigorous and innovative research that our students produce continues to be validated by assessments of academic organizations such as UNIGIS. He also joins an impressive roster of Spatial Science Institute representatives who have been named USC EDC student of the year winners. Over the past ten years in which the Spatial Sciences Institute has collaborated with Esri in making this award, the winners have gone on to establish themselves as leading spatial scientists and GIS professionals.”